Answer the call of the Knightblades to defeat the fearsome Kiristranos before he corrupts the Heart of Valcarta!

Use the directional arrow keys to move your character

Use the 'x' key to open the pause menu

What will the future of 'Heroes of Valcarta' hold after the IGMC2017?

There is plenty afoot within the world of Valcarta! It seems only reasonable that the Knightblades could call upon the heroes again from time-to-time.

Displaying the top 10 scores within the game itself and on the Blacksword Games website.

In order to download this game you must purchase it at or above the minimum price of $1 USD. You will get access to the following files:

I've provided a dropbox link for those interested in playing a fixed version in the game description above!

The characters seem cool, but there are a lot of bugs right now especially in the intro. The text is very hard to read and the dialogue drags on and on. The characters all have the same health and mana.  Not really into this one but maybe others will feel different. Some cool puzzles.

What bugs did you find outside of the 2 in the intro?
Which dialogue did you feel drag on too long?
Based on the game style, do you believe it would be fair if character had varying HP/MP pools?
Which puzzles did you like the most?
Which characters did you use in your party?
What was your score?

Hi! I just finished playing your game. Here’s my review:

Overall, the game was VERY good. This review includes some criticism but that’s only because the overall game is so good and I think it could be made better with these minor tweaks.

I love the use of puzzle mechanics in general. My only critique here is that some of the puzzles rely too much on trial and error since there are unpredictable elements.

I like the timer. That’s a really nice touch. The pace of gameplay in general was quite good.

Due to the importance of keeping up the pace, dialogue delays during text messages (after flipping a switch, for instance) should be removed. Waiting on the text is an unwelcome interruption to the pace of the game.

Walk speed seems to change unpredictably and I never quite figured out why. My best guess, in retrospect, is maybe it had something to do with an area being cleared but I really don’t know why that was happening.

The whole mechanic of character progression (like stat buffs) coming from chests should be reconsidered. Maybe use the crystal balls instead, or something magical that is a plausible source of a stat buff. Chests for this purpose just seem unusual.

It would be nice if the mouse is enabled, not for movement but at least on menus.

Combat was like a long war of attrition, which is only bearable because there are so few enemy encounters. I felt like there was little reason to use a variety of skills, opting instead for the most powerful. One example of how to diversify skill use: you currently have stronger skills that also have a higher chance of inflicting status effect. If this were reversed and the weaker skills had a higher chance of inflicting the effect, combat would be more tactical and involve more interesting decision-making.

The custom animations are quite good.

Visually, the font is very distracting and difficult to read, especially when very large (such as the character skill list during team selection) or in certain colors (dark blue). Consider looking for a font with a little less flourish.

I like the depth and the concept of your game’s universe. If you continue working on the game and improving it beyond this contest, I feel like a cutscene intro would be more engaging and do the story more justice than a text-only intro.

Other than the missing resources in the intro that we’ve already discussed, I did not encounter any bugs during gameplay. People may have trouble with the boss with the four pillars due to this bug.

Hey thanks for getting through!

Out of curiosity, which group of 4 did you select? And what was your score at the end?

To which puzzles are you referring too? The 4 pillar quiz? The chests in the dark? Or both even... I can agree with both, regardless of your answer. Each room was designed to line up with 1 of the Elements / Essences that make-up Valcarta. In retrospect I suppose a chest shuffle could have easily replaced the chests in the dark for the "Trickery" Essence. As for the 4 pillar quiz, the answers can be found in that lovely (bland) text intro... The Essence of Hatred wasn't easy to come up with a puzzle idea for, thus I made it a fight that scaled in difficulty based on your answers.

I agree with the text delays 100%. The amount of times I played through and said "I should get rid of that" is a number far to high to admit lol... One of those things that gets thrown under the rug.

Due to me constraining the room size for all puzzles, so required an extra layer, which is where the pre-determined move speed came from for each room. The game has been balanced around it, but I can agree that would spark a "why am I slow now" reaction.

I'm normally a stickler for combat related things, however in the speed-style game such as this I felt it better to cut back on too many elements and just say "here is your set of tools for this boss", etc. My thought process was basically "If the player is spending too much time figuring out how to do cool stuff in battle, it would take away from their score, so lets make it simple".

The font, yes. It seems to be a 50/50 with people I've spoken too... As for the skills overview when picking a character... I wasn't comfortable enough (within the allotted time frame of the contest) to make the custom windows I had wanted so I patchworked that in strictly for functionality. Ideally it would be more like a skill menu with all effects and their icons listed with the help window text along side them.

The in-depth intro is definitely something that would have been scoped in if I was capable of art to any pleasant degree (lol).

Thanks so much for the critique! I'll be sure to take it under consideration when moving into post-contest!

My group of four was Seraphim, Duncan, Valak, and Maria. I don't recall my exact score but it was very bad (I got an F) because I started very liberally using the Knightblade abilities after the first battle to speed things along.

As far as the unpredictability, I couldn't discern a clear predictable pattern in where the fireballs would appear in the puzzle where the tiles swapped between three different fire configurations. In the puzzle with the lightning and the exploding bridges, the bridge pattern had to be learned by trial and error. It's just a personal preference but I think a puzzle should be solvable without making a mistake simply by understanding and mastering the mechanic, rather than repeated mistakes being the way a puzzle is learned. I just have a bit of a problem with randomness, I guess, but it's not necessarily bad. By contrast, I very much enjoyed the wind puzzle, the underwater breath mechanic, the freezing mechanic, the boulder pushing - basically the ones that didn't have random elements causing you to fail.

I really like the concept behind scaling the hatred boss based on whether or not the person "makes you angry" by skipping your story. It's quite a good idea, it just doesn't work out as intended because the bug makes skipping the story mandatory.

Hmmm... The fire puzzle eh? The floor of that room consists of Darker lava-tiles and light lava-tiles. The light-lava tiles never get touched by the fireballs. I was going for a "move to the safe spot when there is a path". I'll consider a better way to either convey that the lighter tiles are safe or a new method overall for showing where/when the fireballs will be.
For the bridges, I had originally thought to alter the bridge sprite a bit to convey safety or danger. So that, if you're paying close enough attention you'd be able to go through with ease. Perhaps I should put that back on the list of things to do for a post-contest build!

Yeah, sad bit of business with my opening scene. Would have made that all come together a bit nicer...

Anyways, thanks again for the break insight. I'll be sure to consider it when moving into a post-contest build!

Ah, I missed the cue on the fire puzzle then. That's just player error, not a design flaw.

For the sake of the IGMC2017 contest I would please ask that you SKIP the opening scene by either pressing 'x' as soon as the game begins to load (as per the in-game command) or by selecting "Skip Tale" at your first choice.

Wow, very impressive. My only complaint is that you can't revive heroes with a score reducing ability.

Hey thanks for playing!
I had considered attaching a revive effect to the healing score ability, but then decided to remove it.
Perhaps in a version post-IGMC2017 we could see the expansion/adjustment of some aspects!

Well, this looks interesting. Definitely going to try it out.

Thanks for your interest! Hope you enjoy~ 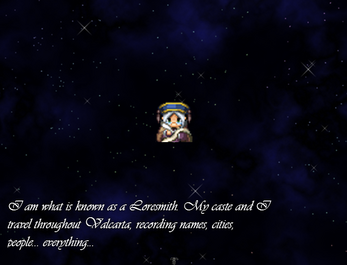 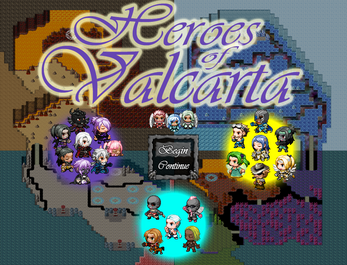 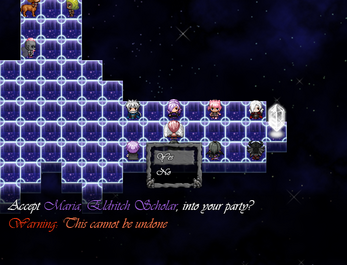 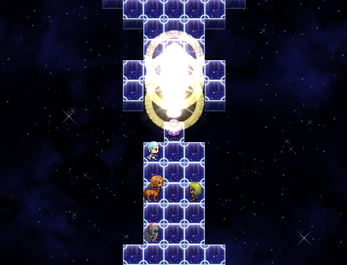 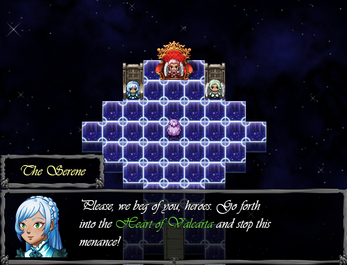 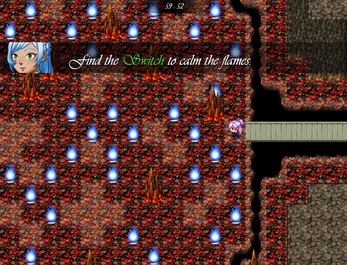 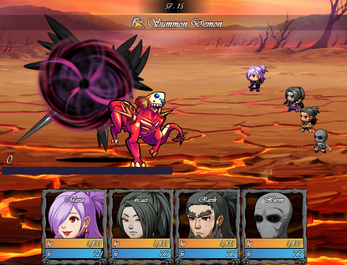 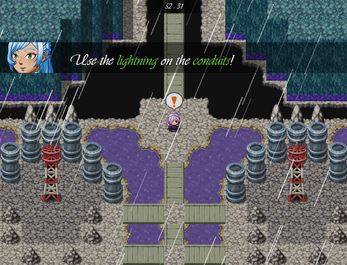 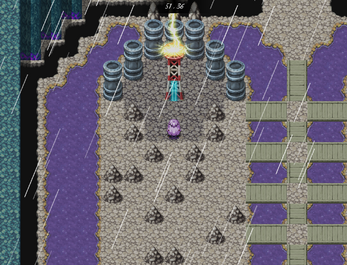 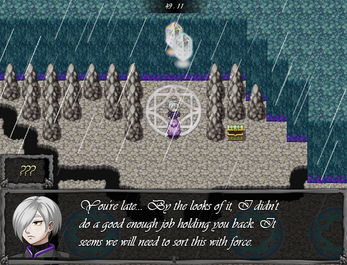 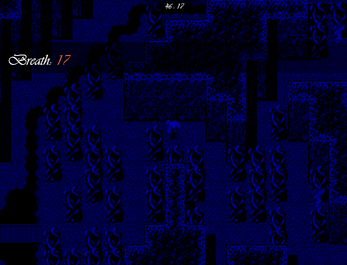 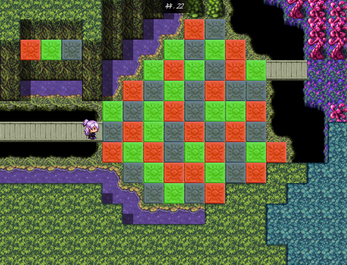 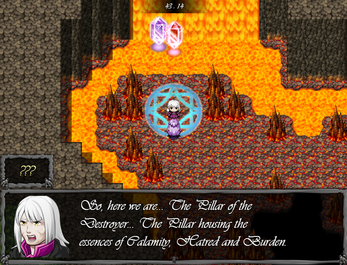 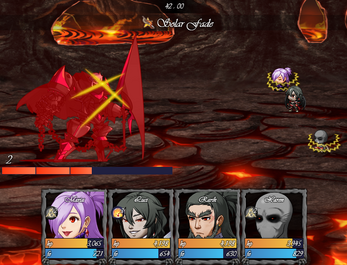 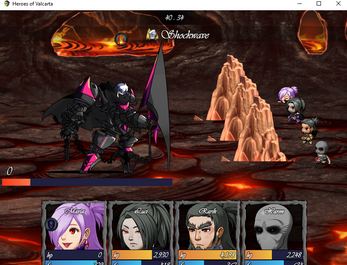 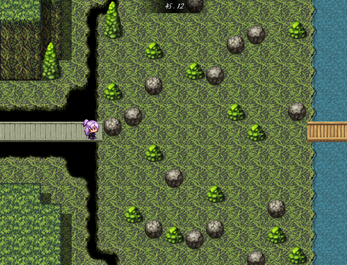 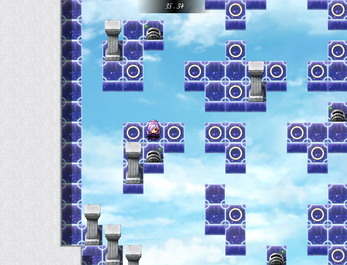 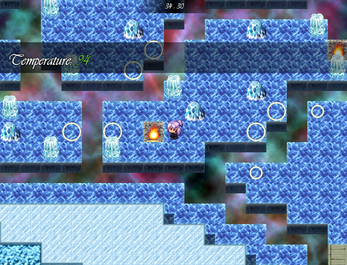 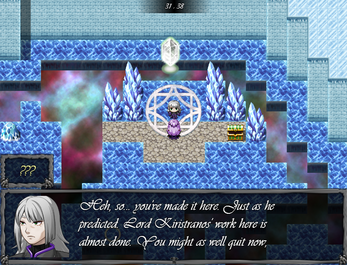 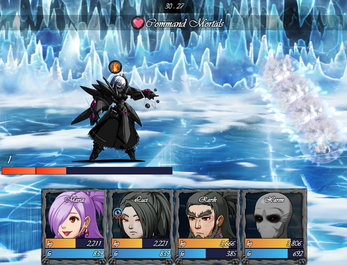 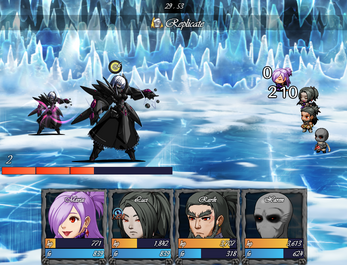 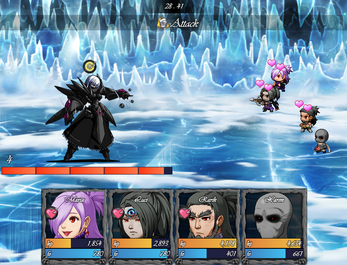